PPM: Tailoring Cannabis to Create Medicine for the Masses

Cannabis is a plant that remains largely stigmatised, along with people who consume or condone it. However, Dr Andrea Holmes and her colleagues at Precision Plant Molecules are revealing the numerous hidden benefits of cannabis, when processed with precision. This Colorado-based company is using advanced chemical and analytical techniques to isolate naturally produced medicinal compounds and tailor effective medicines for its global consumer base.

For a long time, cannabis has been a difficult subject to approach. The pharmacologically-active compounds it contains are illegal in most countries. However, acceptance is on the rise. Numerous US states and European countries now accept that this plant has genuine medicinal benefits.

The rapid growth of the agricultural, scientific and medicinal markets surrounding cannabis is a clear result of shifting attitudes and new laws allowing its medicinal and even recreational use in certain US states. As a result, companies made up of educated, passionate scientists, such as Precision Plant Molecules (PPM) in Colorado, have pioneered a new, consumer-driven market of cannabis-based edibles, lotions, tinctures and tablets.

Chief Growth Officer of PPM, Dr Andrea Holmes, is a highly distinguished and respected organic chemist. She is happy to lead the way in this new industry. ‘We have the opportunity to finally open the mysterious and stigmatised cannabis industry and make it available for wellness products,’ she says. ‘I love this field because it is new, underexplored and sophisticated, but it also presents an opportunity to combine street knowledge of people who used to operate in the underground with experienced and credentialed chemists.’

Knowing Your CBDs from THCs

Cannabis plants produce more than one hundred different cannabinoids, which are chemical compounds that interact with cannabinoid receptors on our cells. Two major cannabinoids are tetrahydrocannabinol (THC) and cannabidiol (CBD).

When the cannabis industry was primarily ‘underground’, the focus of breeders was largely on developing cannabis strains that produce high levels of THC. This cannabinoid compound is responsible for the euphoric feeling and psychoactive effects that are associated with recreational cannabis consumption. Modern cannabis strains are notorious for their high THC content – typically at 15% or 20%.

‘I love this field because it is new, underexplored, and sophisticated but it also presents an opportunity to combine street knowledge of people who used to operate in the underground with experienced and credentialed chemists.’ 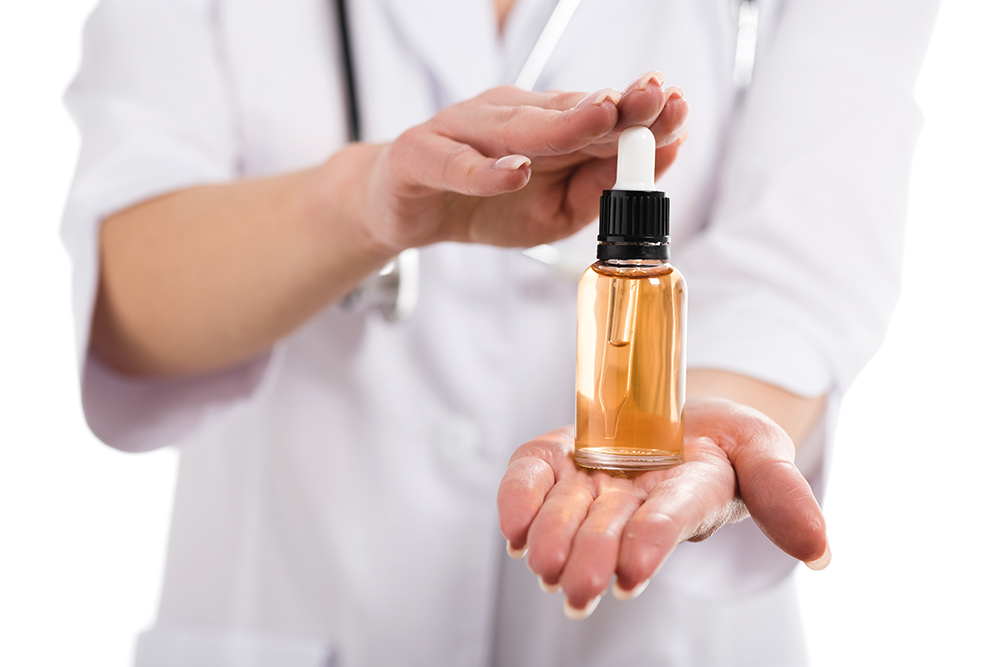 However, since legalisation in numerous states in the USA, cannabis breeding has taken a new direction. The increasing use of cannabis for medicinal purposes has taken the breeding focus away from THC and towards CBD. Known as the ‘medical cannabinoid’, this compound is not psychoactive, and even counters the mind-altering effects of THC. CBD exhibits a wide range of medical effects, which are becoming increasingly recognised by the medical community. In 2017, the World Health Organization published a report stating that CBD could have therapeutic effects on many debilitating conditions, including multiple sclerosis, cancer, epilepsy, Alzheimer’s disease and Parkinson’s, as well as pain, depression and anxiety.

As such, cannabis strains that are bred to produce high levels of CBD rarely contain more than 1% THC – a safe level to avoid psychoactive effects. The plants that PPM use come from high-CBD, low-THC, non-genetically modified strains. They are also grown organically, by certified Colorado-based growers.

Terpenes and terpenoids, more commonly known as ‘terps’, are compounds thought to provide plants with natural defence against pests and pathogens, such as bacteria, fungi and insects. Cannabis plants produce a rich array of terps, secreted from the same glands as cannabinoids such as THC and CBD.

Chemists have been able to separate and characterise numerous terps from cannabis plants: camphene, caryophyllene, limonene, linalool and pinene are just a few examples. Each compound is shown to have its own aroma, be it musky, citrus, spicy, floral, damp or pungent, and each possesses own potential medicinal benefits. Terps interact amongst themselves and with other cannabinoids and plant molecules to give each cannabis strain a distinctive aroma, and unique medicinal benefit.

Many cannabis strains already offer unique and potent mixes of beneficial chemicals. However, PPM’s experienced chemists perform their magic through tried and tested steps of precise heating and cooling within a series of delicate glass tubes, in a process generally known as distillation. During this process, they can isolate individual compounds into their pure form, before recombining them into a series of cannabis oils with specific effects, tailored for a particular health concern. The aim is to maximise the medicinal benefits, such as anti-inflammatory, anti-anxiety, immune-boosting, mood-boosting or sleep-inducing, according to customer needs. For those with specific desires in mind, PPM will go the extra mile and formulate an oil especially for you. These carefully configured oils can then be added to edibles, lotions, tinctures, or tablets for easy administration. 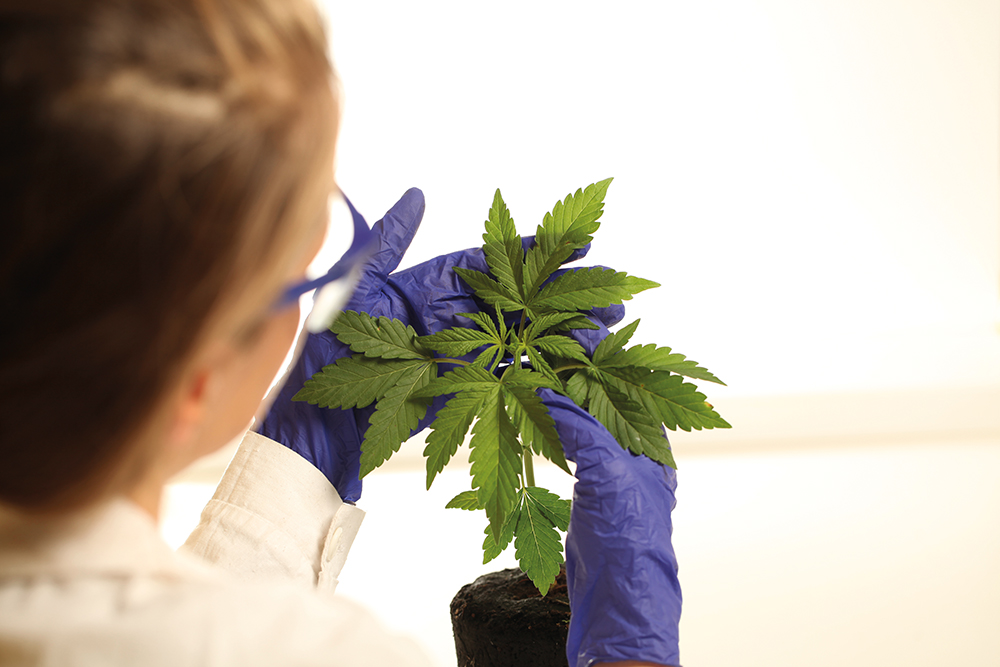 Dr Holmes has been with PPM since the company’s inception, along with the company’s CEO Dave Hanson. ‘My biggest achievement is that I hired a competent science driven workforce, with PhD, Master’s and BS degrees who have analytical and pharmaceutical experience,’ says Dr Holmes. ‘We built a company that stands out and that others want to copy because we implemented stringent testing protocol with high sophisticated scientific instrumentation.’

It is clear that Dr Holmes implements the highest standards – and rightly so, as many of her customers rely on PPM’s medicines to deal with serious ailments. PPM’s science-based culture ensures quality assurance throughout manufacturing, as they analyse and quantify the cannabis before, during, and after processing.

Initially, the raw material is tested for contaminant fungi such as yeasts and moulds. Then, they use advanced chemical methods called High-Performance Liquid Chromatography, Gas Chromatography Mass Spectrometry, and Headspace Solid-phase Microextraction to guarantee efficacy throughout the purification process. These cutting-edge techniques ensure that PPM’s products are of consistently high quality by separating and quantifying CBD, THC and other cannabinoids, as well as the highly volatile terpenes, which are easily lost by evaporation, even at low temperatures.

The scientists at PPM have gone one step further by developing water-soluble cannabinoids. Cannabis-oil extract naturally separates from water, giving a ‘salad oil effect’, and this remains the industry standard. However, the tireless work of PPM has enabled production of transparent solutions, in which the fats and lipids responsible for separation are removed. This work is likely to develop the markets for cannabis-infused beverages, such as juice and tea, even further. 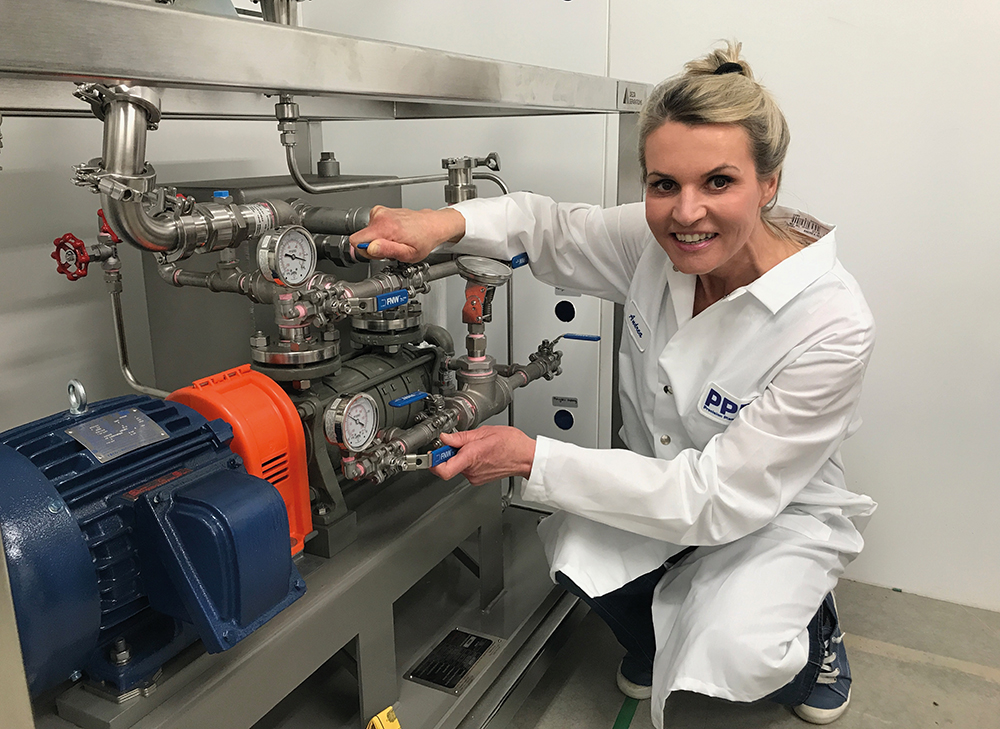 The pet food industry is another sector in which Dr Holmes believes tailored cannabis-infused tinctures, food supplements, and treats can make a difference. She is a self-confessed animal lover – spending much of her spare time in shelters or with her own collection of critters. Therefore, she knows first-hand the pains and stresses that many of our furry and feathered friends can go through.

Scientific knowledge of potential pain-easing, stress-reducing effects of CBD on our pets is growing, as are markets for pet products. Many studies have shown the positive therapeutic effects that daily use can have on cats, dogs, ferrets and monkeys. Furthermore, 45% of vets remain uncomfortable discussing these treatments with their clients.

Dr Holmes hopes to expedite changes in the ways that such treatments are perceived. She actively endorses companies providing veterinarians with formulated CBD treats and urges vets to encourage pet owners to make use of them.

A complex interplay of the cannabis plant’s cannabinoids, terpenes (‘terps’) and nutrients means that the whole plant is quite literally greater than the sum of its parts. For example, the most common terp in cannabis, myrcene, lowers the blood brain barrier, increasing blood flow to the brain so that other terps can follow. This provides faster and more efficient uptake in a process known as the ‘entourage effect’, meaning that two plus two can indeed equal seven!

‘To be successful in the cannabis industry, you must be at least 10 times better than the best,’ says Dr Holmes. With their competent science-driven workforce, PPM is certainly that. ‘We are a team of scientific innovators,’ says Dr Holmes, ‘isolating non-psychotropic cannabinoids and exploring “entourage” combinations to achieve their fundamental core value: to improve health through advancing science with research and development.’

Recent seminal cases in countries such as the UK have shown us that current laws on drugs are lagging dangerously behind current research. Watch this space as responsible companies such as PPM continue to push the frontiers into a new age of customisable medicines for people and their pets. 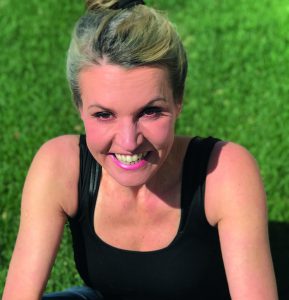 Dr Andrea Holmes received her PhD in organic chemistry at New York University, after which she took a postdoctoral research position at Columbia University in New York City. Since 2005, she has held the position of Professor of Chemistry at Doane University in Nebraska and has received over $6 Million in federal funding, published over 60 articles on nano-structured materials, miniaturised sensors, surface modifications for targeting resistant bacteria, colorimetric sensors, and cannabinoids. She received the Presidential Early Career Award funded by the National Science Foundation and is a national recipient of Henry Dreyfus Teacher Scholar award. In 2018, during her sabbatical leave, Dr Holmes was appointed Company Builder and Co-Founder for Precision Plant Molecules and quickly progressed to Chief Growth Officer of this young but rapidly developing company.